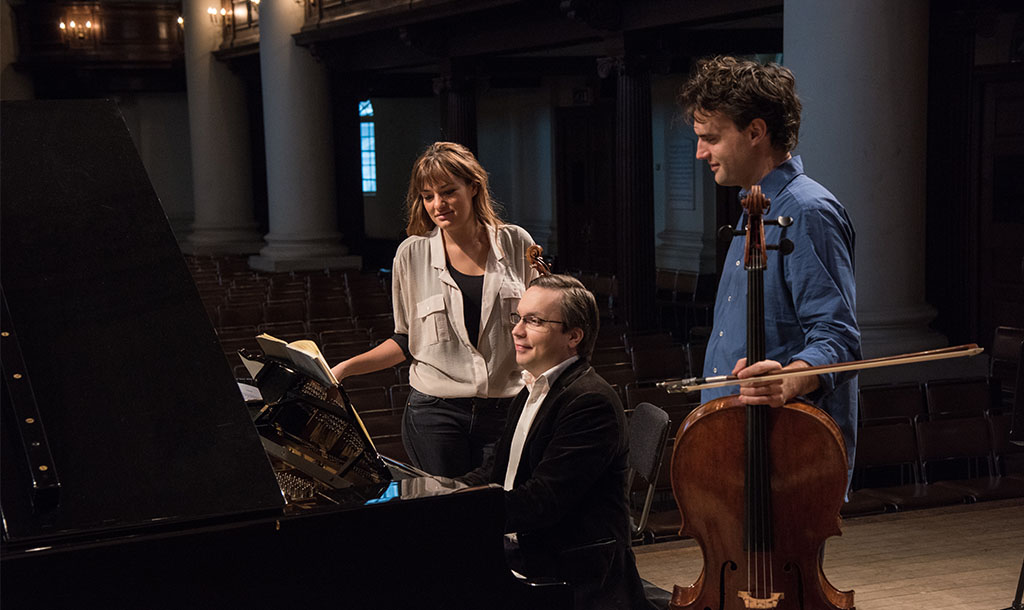 In the Italian home in a small Scottish town, it was reportedly Abba and Bee Gees that they listened to. Nevertheless, as a very young girl, Nicola Benedetti got her hands on the violin. As early as at age 10, her colossal talent sent her to Yehudi Menuhin’s renowned talent school south of London. Here, Benedetti met the German cellist Leonard Elschenbroich who was also ten years old when he started studying here. The trio’s Ukrainian-born pianist, Alexei Grynyuk, also grew up as an extremely talented prodigy. Grynyuk gave his first public performance as a 6-year-old. Today, all three are established world stars.

You will be met by romance of the highest calibre immediately from the opening tones of the concert. Robert Schumann wrecked his piano hands through the manic training of his fingers’ independent movement (he invented an instrument to force them apart) – but that did not stop him from composing supremely romantic chamber music for piano trio.

The romance is expressed in the insistence of the music on eliciting great emotions. Then there is a whisper, then there is a shout; the melodic material is persistently penetrating and sensual in its constant alternation between light and dark, major and minor, large orchestral and small and intimate. The slow third movement is bursting with trapped pain and sadness. Not even the fiery and triumphant last movement erases the impression of the seeking, romantic soul.

Wolfgang Rihm’s modern classic within the chamber music repertoire of 1980 is full of references to romantic feelings. There are no direct quotes from romantic composers but, in his own words, Rihm wanted to pursue the innermost powers of Schumann’s music, in particular. Violent bi-polar clashes between order and chaos provide a fantastic perspective on the 19th-century quest for new horizons: How would Schumann’s music have sounded if he had lived in the 1980s?

After a brief piano introduction, the cello presents the first theme of Brahms’ large-scale piano trio. Already in the first movement, it is teeming with thematic ideas and moods. The scherzo opens with a thick rocking theme in minor. The movement returns to major and leads to the adagio, which slows one’s heart rate all the way down. Subdued piano chords strike an almost mysterious vibe before the cello’s heat eclipses the serious nature of the movement. The soft piano chords end the movement. The fourth movement returns to minor and gives the work a dramatic ending with syncopated rhythms also emphasizing the seriousness and heaviness of the piano trio.